September. 2017. I buy myself a menstrual cup after a year of procrastinating about it.

It was my first step into a “zero” waste type of lifestyle. I had already started to dabble in bringing reusable cloth bags to the supermarket (which was easy enough), but was I willing to go “all the way”? Was I willing to let that special something inside of me???

And I did! Like all first times, it wasn’t great and it hurt a little (okay kinda a lot). I detailed my experience with the cup in a two part series:
Part 1
Part 2

But it’s been well over a year now! Those of you who follow my Instagram know that I couldn’t go back to disposable pads. It has honestly changed my view of periods. Don’t get me wrong. It still sucks. And I still have 99 period problems, but I rarely ever have to worry about the blood.

And perhaps it’s just a state of mind, but while my hormones still go crazy during that time of month, my symptoms seem a little less severe.

Turns out the menstrual cup was the last push I needed to realise the waste I was producing wasn’t sustainable. I completely understand the cup isn’t for everyone. Your vagina and uterus is a unique little fingerprint!

Please, don’t ever feel guilty about your period. Reusable alternatives may not be a viable option for you. It would be awful to suggest the right way to have a period is to have a “sustainable” one. But if you can and are willing to open your legs (soz, for the pun) for a “sustainable” period I do have some options if a menstrual cup isn’t for you.

Yup! There are reusables alternatives that aren’t as scary as shoving a silicone cup up your hooha!

It’s strange to say it would be a “second” choice. But truthfully, I use my period underwear a lot more frequently than the cup itself.

You would have heard me say this about a million times already (sorry), but I personally like to “double bag” meaning I wear my menstrual cup and period underwear on my heavy days. And I only wear period under on my light days.

Why do I do this?

For me “leakage” has ALWAYS been a problem, even with those huge floaty pads that seem to cover my whole lower body

I bought a pack of 3 from Shethinx.com way back in 2017 – around the same time I bought the cup – thinking it would fail me. I understand Thinx underwear ain’t cheap, at the time of purchase they were $95 AUD* after shipping and conversion. It’s important to note that you also need to think about all the money you actually spend on tampons and pads over a year! (*The prices in 2019 are a little more pricey, so you will need to work out if they will fit into your budget)

At the time, I went with Thinx period underwear as they were a well-known brand – nay, they were pretty much the only brand that was accessible to us little Australians. I purchased two “hiphuggers” and one “sport”.

I actually really like the hiphuggers. They’re comfortable and I quite like the band on top. Most importantly, they fit well. I didn’t (and still don’t) like the sport, as it was (and is) constantly giving me weggies and I wouldn’t recommend this style. However, I know this is one of their most popular styles, so if you do decide to go with Thinx and the sport, I would suggest going a size smaller or simply just go with the hiphugger.

I’ve worn the underwear many many times, without my cup on the last remaining days of my period. Mostly, because I couldn’t be bothered taking out my cup, cleaning it and inserting it back in. I think the underwear is great for “lighter” periods and doesn’t produce much or any smell. I’ve also worn it on the day of my heaviest period (without the cup) – and to be honest, I’m not sure it’s for me on those super heavy days. That being said, I’m so used to “double bagging” on my super heavy days that I can’t even imagine “just” using the cup. I feel the most secure using both the cup and period underwear during the blood bath.

But the period underwear can be worn just by itself. The hiphuggers and boyshorts will hold up two tampons worth of blood! So, if you can’t use the menstrual cup these are a good alternative.

On a TMI note, I live in Australia (not the TMI bit) but during my seven day periods, I ALWAYS get a period rash – you know, like a diaper rash but with pads! I honestly, haven’t had a “pad” rash since switching over to menstrual cup and period underwear.

There are cheaper alternatives to period underwear and the menstrual cup. I personally haven’t tried reusable pads, but I know that a lot of people love them.

You can get brand names like Hannahpad or cheaper reusable pads on Esty as well. 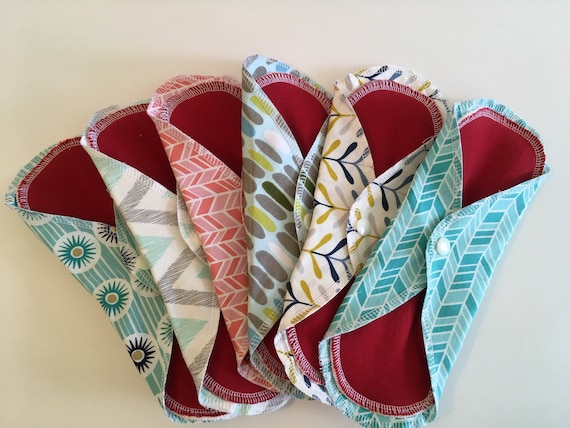 How to clean the menstrual cup and the alternatives:

When it comes to the menstrual cup, I personally just pour out the blood and give it a quick wash in the shower. I find it easier this way. However, I have changed the cup in a public toilet before and all I did was just pour the blood into the toilet and insert the cup back in. Sorry! There really is no way to explain this to make it sound all fancy and nice. Before and after each period, I will wash the cup with a natural soap. I did boil the cup the first time I used it but I haven’t “boiled” it since. (Hey, I’m still alive…but you know maybe, listen to the instructions. I don’t want that on my conscious!).

With period underwear, you have a couple of options. I’ve seen people literally just wash one or two pairs in the washing machine by itself. Personally, this isn’t for me. So, I tend to give the underwear a spot wash with soap and let it dry overnight. They dry pretty quickly which is a bonus. Unlike the menstrual cup, I don’t recommend just having “one”. For me, starting out, I had three pairs which worked out great. I do have a few more pairs now, which is kinda great because I can give it a quick spot wash let it to dry and give it a proper wash in the washing machine at the end of the week. (FYI – I haven’t had issues with staining, mostly, because the lining is black.)

In terms of the reusable pads, I know a lot of people have had issues with staining. I’ve seen a few people remedy this by soaking the reusable pad in vinegar and baking soda overnight before giving it a wash. Like the period underwear, I would recommend having more than just “one” reusable pad. Personally, for me, reusable pads sounds like a little more work, but they’re a really affordable options and I’ve seen people make their own!

I hope that helps! I know, I know. I’m ALWAYS talking about periods and the internet probably knows me as the period girl. But, ah, well, I don’t really care.

Mostly, because when I was younger I was so incredibly a shamed of my period. Now, I’m just making up for lost time.

What’s your go to? Have you tried any other alternatives?

I read back in the day, women used to use “hair” as pads, which I found interesting. Not for me, but no judgement!